Committed to Growth: Monterra Lumber Mills Gets an Upgrade


Big changes are happening in Bolton, Ontario. In August 2020, Weston Forest acquired Monterra Lumber Mills, a refurbishment facility that has been a staple in the community for over 30 years. The company has since modernized the plant to increase its production capacity to meet growing demand.

Monterra was founded by Claudio Tersigni, who continues to run the plant today under Weston Forest. The factory has a long history of partnering with various industry players, including Weyerhaeuser and Green Forest, says Steve Rhone, CEO of Weston Forest. But, for the last 10 years or so, Tersigni was the sole owner of the business.

As demand for lumber products increased dramatically over the past summer, Weston Forest began looking for additional production capacity to add to its existing business. Given its proximity to the company’s Toronto locations, Monterra was the perfect fit, says Rhone.

“On top of that, we think remanufacturing wood, adding value, is generally a very good opportunity and area of ​​interest for us,” he says.

The mill cuts and chops lumber into as many value-added products as possible, including 1 × 2, 1 × 3, 1 × 4 and 2 × 2 material for retail distribution courses in Ontario and the United States. United, as well as fence boards. By-products are made into industrial components, including deck stakes, pallets, and industrial lumber components.

Products are shipped across Canada and the United States, as far south as Georgia, with a focus on the Great Lakes States and Ontario due to geographic proximity.

Since acquiring the plant, Weston has increased its production capacity from 15 million feet of finished product per year to 20 million feet.

“Primarily, our goal is to make something that will end up being torn or remade in the first place. So, we’re going to take a wide piece and make some narrower strips out of it. For example, we could split a 2 × 6 into two pieces of 2 × 3 or three pieces of 2 × 2, depending on what our command file asks. Then we will take it back and divide it on the other dimension, ”explains Rhône.

At each stage of the process, lumber is felled for pieces that will not reach the expected production. These parts are then cut into lengths which will provide more value to the factory.

The factory also has a Weinig moulder line to produce fence boards. For this process, Monterra uses several 1 × 6 materials, in different grades, lengths and grades, Rhône explains. These products go through the moulder, are graded and then cut in a cut line, mainly to lengths of five, six and eight feet for fence boards.

Scroll saws are supplied by a local manufacturer, while all of the factory’s slitting saws are sourced from TOS, based in Czechoslovakia. The factory also produces bridging components and stakes using a custom designed bridging and staking machine manufactured by Todd Engineering.

The finished products are packaged according to the quality of the wood.

“With each dimension that we manage, we are targeting a number of different grades,” explains Rhone. “We make a superstrip (which is an almost perfect piece of wood), premium grade, utility grade and better, then economy grade. So we take at least four qualities off the chain while we are passing material. “

All wood waste, including sawdust, shavings and clippings, is collected and reused as animal bedding and mulch.

Upgrade capability
Since Weston Forest acquired the plant, the company has added a new cutting line and improved one of the slitting saws. They are also finalizing the installation of a new moulder, but there have been some delays.

“The biggest challenge was getting the electrical components in on time,” says Rhone. “Everything we do seems to have a backlog somewhere in the supply chain. So we are waiting for some parts, but we are almost there and we should be operational in the next few weeks. “

Weston also optimized the layout of the plant, moving the equipment to make room for new machinery. Through upgrades and optimization, the plant’s production capacity has improved by five million feet per year, to 20 million feet.

To meet the high demand, the company hired 14 additional employees, for a total of 32 people working a day shift and an afternoon shift. The company is also looking to modernize its saw line, which currently uses a Baker saw, in order to further increase its production capacity.

Increasing plant capacity will be critical to meeting the increased demand for lumber products used in construction projects.

“It’s been almost six months since we’ve been calling demand levels crazy, crazy, hard to believe, hard to understand,” says Rhone. “I’ve been doing this for 34 years and I’ve never seen anything like it. The things that drove him to this point aren’t going away quickly, so I think that even if nothing goes straight up or down, we’re going to be going through the same thing for at least the next four to six months.

The increased demand means a tighter fiber supply for all lumber producers, including remanufacturers like the other Monterra and Weston facilities.

However, “Weston has an excellent relationship with all of the factories in North America and we are a long and established customer. So I think we’re at least getting our fair share of what’s available, ”says Rhone. “We haven’t lacked for anything, but the market has certainly been very tight for the last six months or so. “

Stack and sort the wood after it has been cut. 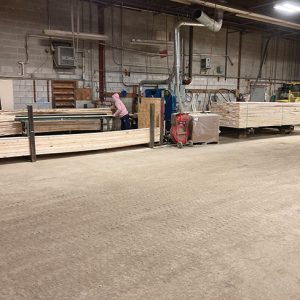 A disproportionate impact
The greatest concern for Monterra Lumber Mills, and for Weston Forest as a whole, is the softwood lumber duty levied by the United States. While the duty was revised at the end of 2020 from around 20 percent to around nine percent, “it’s still pretty tough,” Rhone says.

Lumber recyclers like Monterra feel the impact of the duty disproportionately, he adds. In effect, they buy lumber from sawmills as if the sawmills were selling that lumber directly to the United States. Therefore, the duties that these sawmills would pay on the material are added to the value of the lumber before it is loaded onto a truck. Transport costs are then added to that.

So when Monterra buys lumber, the cost is already higher than normal. Then Monterra remanufactures the lumber into value-added products, which means they add the cost of milling and manufacturing to the price. Once this process is completed, the products are sold to customers in the United States and Canada. Monterra must pay the duty on the lumber in addition to this finished price.

“So we pay duties on all of our manufacturing, all our processing, our transportation and our profits, which disproportionately impacts remanufacturers – not just us, but everyone who makes lumber in Canada,” says Rhone.

“It’s a surcharge for the benefit of a very few on a product whose supply is limited. I think it’s bad policy, ”he continues. “Unfortunately, it’s American-driven, so we have to wait for an opportunity to resolve the situation when the Americans want to come back to the table and have a conversation.”

Rhône hopes the new Biden administration in the United States will be motivated to level the playing field and lower or remove tariffs on softwood lumber. He notes that at the end of the day, it’s the customers – including U.S. customers – who pay a disproportionately higher price.

Expanding footprint
Therefore, Rhône believes that Canada must enter into a long-term agreement with the United States regarding the distribution of softwood lumber between the two countries.

“The constant interruptions or changes in policy every five to seven years as we go through a different softwood file disrupts the company’s long-term planning,” he says.

He also believes the forestry sector needs to do a better job of explaining how environmentally friendly the industry is and how lumber is a carbon capture solution.

“I think our industry is not doing a great job telling this story. But, I think mass timber and the ability to use timber for high rise timber buildings will be a great opportunity that we need to capitalize on as a country and as a civilization in general, ”Rhone said.

In five to ten years, Rhône believes the industry is likely to grow stronger as more people realize the environmental benefits of forestry and wood products.

“I think the industry is sustainable, I think it’s on a good footing, and as long as we keep our economy going, the industry should stay very strong,” he says.

This is good news for Monterra Lumber Mills and for Weston Forest as a whole.

“We are determined to grow. We have been a relatively high growth company for the last decade, growing at around 15% per year, ”says Rhone. “We recently entered into an agreement with a Boston-based private equity firm called Watermill, which acquired our shares in early January, and our ambition is to accelerate our growth.

“We are looking to expand our geographic presence, both in Canada and the United States,” he continues. “We currently have four facilities and would like to expand them in the coming years. “