Monday, June 21, 2021, 3:18 p.m. – Severe thunderstorms developed in eastern Ontario and southern Quebec on Monday afternoon. Particular attention is paid to an area stretching from west of Ottawa to Montreal, north and south of the St. Lawrence to west of Quebec City, as there is a risk of a tornado.

Father’s Day ended with a bang for some in Ontario, with severe thunderstorms sweeping through the southwest on Sunday evening – with frequent lightning and heavy rain reported. Nighttime storms even triggered a tornado warning in the Windsor area, although no tornadoes have been confirmed. More violent thunderstorms were triggered Monday afternoon, but in eastern areas and in southern Quebec. Warnings are currently in place for these. Some of the storms can turn rotating, so there is a risk of a tornado extending just west of Ottawa to the Eastern Townships in Quebec. More information on the schedule and impacts below, as well as an overview of the cooler weather conditions for the months to come, below.

Visit our Complete Summer 2021 Guide for a detailed look at summer forecasts, planning tips and more!

MONDAY: THE THREAT OF SEVERE THUNDERSTORMS IS MOVING EASTWARD

Storms in the United States that spread to southern Ontario late Sunday reached severe criteria in the southwest, triggering a tornado warning in the Windsor area overnight. Although no tornadoes have been confirmed, frequent lightning, strong winds and heavy rain were reported overnight. 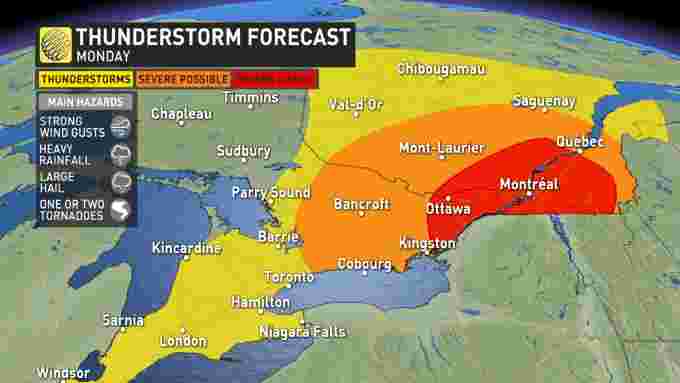 They were triggered before a cold front which is expected to manifest in the evening.

With the rotation of the atmosphere, there is a risk of rotating storms today, however, not all rotating storms produce tornadoes. Residents of at-risk areas are encouraged to keep abreast of forecasts and watches or warnings that may be issued as storms develop.